How do you move IT infrastructure for a large government entity to the cloud?  By selecting one of the most technically capable providers to lead the way.

That is the role Team ADEV is currently providing for the U.S. Transportation Command (USTRANSCOM) and the U.S. Air Force Air Mobility Command (AMC).  USTRANSCOM’s “Sprint to the Cloud” intuitive has seen setbacks, some of them caused by cloud consultants they engaged who could not deliver on their promises.  So eventually they turned to one of their highest performing and most technically capable programs – the Agile software development program AMC ADEV.  Team ADEV, headed by SuprTEK along with partners SAIC and Tapestry, is developing advanced web application for AMC and USTRANSCOM,

Late last fall Team ADEV was directed to start developing its web applications in a cloud development environment (CDE) hosted by Amazon Web Services (AWS).   Team ADEV took on the task and overcame a number of security and technical obstacles along way.  In a very short period of time, most developers on the team migrated from an in-house fully isolated development environment to developing in the cloud.

There are still a few obstacles to overcome, such as fully implementing an automated testing strategy, but overall the transition has been a huge success. 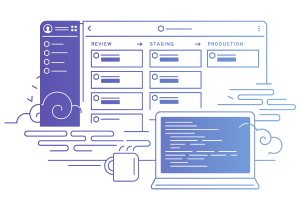 In fact, Team ADEV recently delivered its first build completely developed in the cloud.  It has also created a Dev Ops Jenkins Main Build Pipeline to quickly and automatically promote and deploy a code branch to an environment on a merge request.  This includes Fortify and SonarQube scans and (in the near future) automated testing.  It also includes containerization that makes the code more environment agnostic (i.e. “cloud friendly”).

The not-too-distant-future goal is to deliver a build in the cloud directly to a cloud-hosted production environment so end users can take advantage of the latest features much more quickly than they can in the current delivery process – which sometimes means months between the day Team ADEV delivers a build to the day it is fully installed on the governments production servers.

Team ADEV is happy to be a leader in supporting the “Sprint to the Cloud” and to deliver more capability to our warfighters faster.

Don Reed is a Senior Technical Writer and Project Support Specialist with the ADEV program. His background includes engineering and programing, project management, quality management and process improvement, and business-technical communication. Don has a B.S. in Electrical Engineering and a M.A. in Communication from Saint Louis University.