Shawn Jones, a software developer for Team ADEV, was recently presented the 2016 SuprTEK Rookie of the Year Award.  Shawn was recognized for being a great contributor since joining Team ADEV.  Shawn has demonstrated an expertise in User Interface (UI), he played a role in streamlining code by improving the use of Cascading Style Sheets (CSS), and Shawn was an invaluable team member when ADEV assembled an Agile crew to participate in the Department of Homeland Security (DHS) Flexible Agile Support for the Homeland (FLASH) procurement challenge.  Shawn is the second ADEV developer in three years to receive the Rookie of the Year honor.

Shawn has become one of the “go to” team members when it comes to creating great UI for the suite of web apps being developed for the ADEV customer.  Shawn took the initiative to design UI mock ups for several of the web applications currently in development to demonstrate potential improvements.  Then, taking input from customers and team members, Shawn led efforts to redevelop the UI, and provided a real WOW! factor when it was presented to the customer.

By listening carefully to what the customer wanted, Shawn used his UI expertise to convert a part of the application display that was not fully meeting customer wishes into a User Interface that exceeded expectations.

Shawn has also been a leader in reducing duplicate code through improved implementation of CSS.  Aligning with his UI expertise, Shawn demonstrated to other team members, using existing code, how to effectively implement CSS in object oriented code by employing a more recent and powerful form of CSS – Syntactically Awesome Style Sheets (SASS).

Using SASS more effectively had several paybacks: it reduced the code base, it made developer efforts more efficient, and it provided a more consistent display across the apps for users. 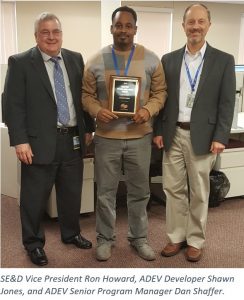 Shawn passes on a lot of credit for his award to his fellow team members. “I don’t think I could have been successful without the receptive nature that exists within my team,” Shawn stated when receiving the award. “Everyone on the team has been open to suggestions from a new-comer, plus provided me with consistent guidance. They allowed me to be myself while growing into the team.”

The recognition includes a commemorative plaque and a gift card.  Congratulations Shawn!

Don Reed is a Senior Technical Writer with the ADEV program.  His background includes engineering and programing, project management, quality and business improvement, and business-technical communication.