A Summer of Learning for ADEV Interns

One sign that an intern likes the company is if he or she signs up for full-time employment.  Such is the case for Team ADEV’s 2018 summer interns John Brandenburg and Zach Carrill.  Each has tentatively agreed to return to SuprTEK after graduation to continue developing a suite of web applications for the Air Force Air Mobility Command and U.S. Transportation Command.  They want to continue to be part of a team that they say is inviting to young developers – but also to work on challenging, leading edge technology that serves an important purpose. 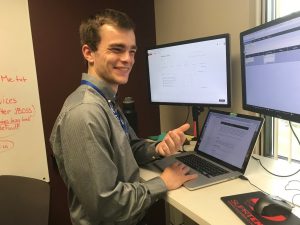 “I’m thankful I received the opportunity to intern at such a phenomenal company.  It was a great overall experience and i couldn’t have asked for anything better.” – John Brandenburg

Both John and Zach admit they felt nervous on their first day at Team ADEV, but they quickly felt at home and part of the team when they received their assignments.  Instead of being shuffled from one job to the next to give a basic overview of the business as they had feared, ADEV placed each as a software tester on a specific team for the whole summer.  Both interns appreciated this, as it allowed them to specialize in certain fields and make distinct impacts on ADEV projects.  “I felt like I belonged,” says John.  “I wanted to have a more impactful role where I worked, and I felt like I did that here.” 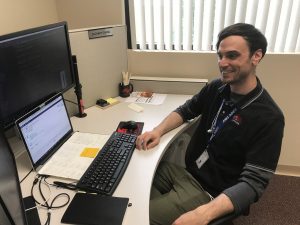 “The experience working here this summer has been invaluable.  No class could have given me the kind of experience I’ve had working on a project of this magnitude and I’m forever grateful for that.”– Zach Carill

Of course, both interns have much to say about their experience and what they learned over the summer, and teamwork is one of their main take-aways.  Whether it’s sharing workloads, asking questions about a task, or discussing uncertainties, both describe how rewarding it is to work closely with a team as it ensures project problems are addressed and solved.  The interns also felt their teammates were friendly and helpful, making their learning process much smoother and less intimidating.

Though the work was sometimes daunting, neither intern shied away from his responsibilities.  Both hit the ground running and got along well with everyone, their team leads say.  They impressed everyone with their tenacity and enthusiasm, making it no surprise Dan Shaffer, ADEV’s Director of Operations, offered them each a full-time job upon finishing school.

Nor is it a surprise that John and Zach accepted.  While at first they took the internship mainly for the professional experience, they now say they appreciate it most for showing them how it feels to work for people who respect them.  Neither can wait to return to the team next summer, and likewise the team can’t wait to have them back.  But as Mr. Shaffer told them as they returned to school, their priority now should on completing their degrees.

Thanks again for all your hard work, guys.  We look forward to working with you again soon.